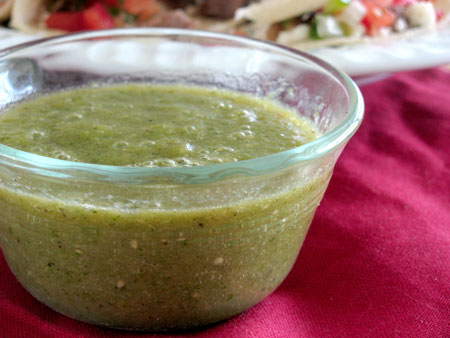 This salsa verde recipe is the second recipe I requested from the chefs while I was in Mexico.  I had NO idea my post on pico de gallo and my hurt over the racism I’ve seen around me lately would spark such a debate, or the HATEFUL and ANGRY emails and comments I received.  I didn’t approve the comments but I have to say I was pretty shocked.  They say if you want lots of comments “be controversial”, but that certainly wasn’t my intention!

I realize that where I live I’m no longer the minority, and I don’t face the same issues a lot of people around me do, but I don’t see that as a reason not to speak out against racism when I see it.  I will always stand up against someone who bullies someone else whether it’s based on race, gender, age, strength, etc.  I’ve been a victim of some terrifying situations, and it took someone standing up for me to show me I can be strong for myself and others (that’s a story for a whole different post!).  So maybe some people feel I’m speaking from a “position of privilege” but honestly they don’t know me, and aren’t willing to post their real email address so we can have a discussion about what upset them so much in my last post, so I don’t think they’re very qualified judges. 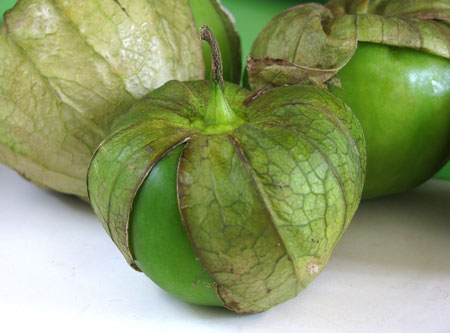 To all of you who still like me and read my blog, THANKS!  Let me just take a breath here and move on to the real reason for this post…whew… Salsa Verde!

Salsa verde is the lovely green salsa that you can get at pretty much any authentic Mexican restaurant.  It’s made with tomatillos, which despite their name are not actually a green tomato, but both tomatoes and tomatillos are in the nightshade family.  Tomatillos grow with a papery husk that splits as the fruit ripens.  I love buying fresh tomatillos because if life gets overwhelming and I forget to cook with them for a week or two, they’re still good!  Just make sure to remove the husks and seal them in plastic bags in your refrigerating to make them last as long as possible.

One chef in Mexico had a sour look on his face as he told me that some people use canned tomatillos or boil fresh tomatillos to make salsa verde.  I was obviously supposed to know that this was absolutely not the right method, but it had been a long day and so I needed some guidance.  “Is that bad?”  I asked.  “Si!!”  Both chefs shouted then laughed with me (or at me?).  I must have looked like a mad woman with my sunburned shoulders, tripod under one arm, scribbling down every word they said about a recipe that was so common to them.  But I was so appreciative of the chefs’ time as they patiently talked me through the recipe. 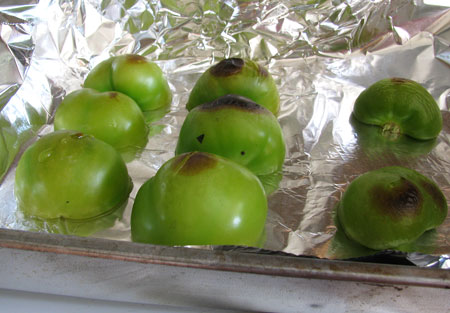 Apparently the best salsa verde is made by roasting fresh tomatillos, which makes sense because roasting chars the flesh and adds a depth of flavor that you just can’t get from boiling.  The chefs use a food processor to make their salsa verde, but the base for our food processor got melted in a small kitchen fire back in November.  Fortunately the blender still works and was perfect for pureeing the ingredients. 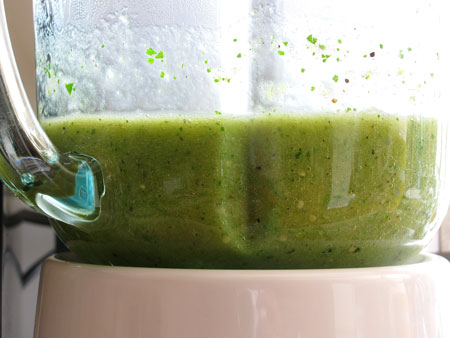 I love salsa verde with tacos, quesadillas, nachos, pretty much any dish that reminds me of Mexico!  Next I’m going to try using it in my chilaquiles recipe instead of the canned tomatillos. 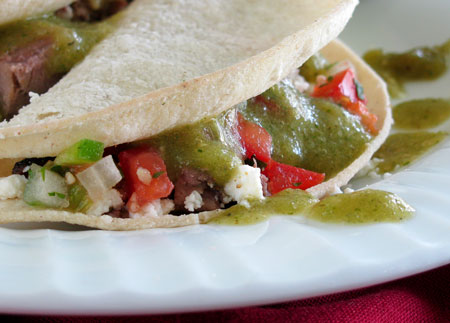 Preheat your broiler.  Remove papery husks and stems from the tomatillos and cut them in half.  Line a baking pan with foil and place tomatillo halves cut side down in the pan.

Broil tomatillos 6-8 minutes, until flesh is charred and they’re very easily pierced with a fork.

Place tomatillos, onion, cilantro, lime juice, jalapeno and sugar into a blend and puree about 10-20 seconds (until well mixed). Taste, add salt and pepper if desired and mix once more.