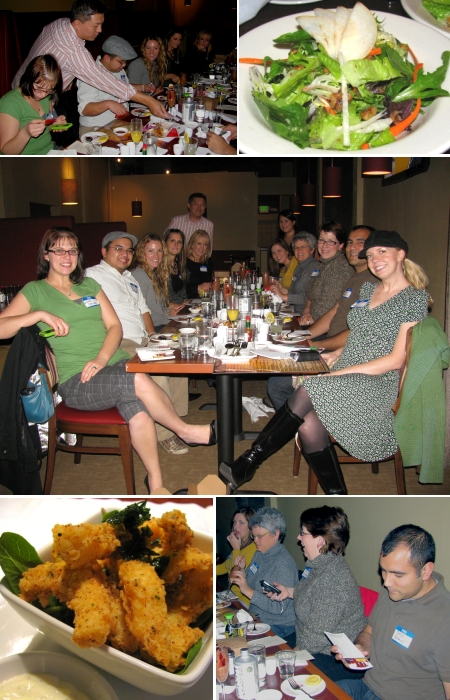 Hey friends, I have exciting news!  After months of recruiting, planning, and networking, the Seattle Tastecasting team launched with an amazing event at Chao Bistro on Capitol Hill in Seattle.  Chao Bistro set the bar INCREDIBLY high for future Tastecastings.  We had 18 courses to make sure we got a sampling of their breakfast, lunch and dinner menus plus dessert and drinks.  If you missed my previous post on Tastecasting, basically I head up a team of people in the Seattle area who are well connected in social media.  A restaurant or food establishment gives us a free sampling of their menu, in return we tweet, blog, post on facebook, flickr and any other network we’re a part of.  It’s a great way to promote local businesses and a wonderful experience for the team.  Tastecasting started in Columbus, Ohio but there are now teams all over the US. 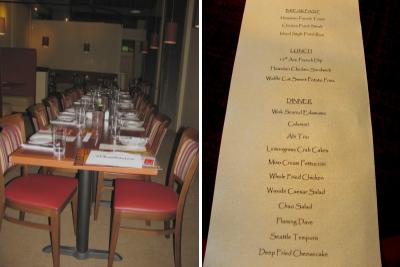 When I first arrived I was impressed with the comfortable atmosphere created by soothing and simple decor.  The flat screen TVs in the dining area were well utilized, they show sports on Sundays, but art and daily specials during the week.  Paula the restaurant manager had laid out copies of all the menus (breakfast, lunch and dinner) as well as a special menu they created just for our tasting on an elegant metallic card stock. 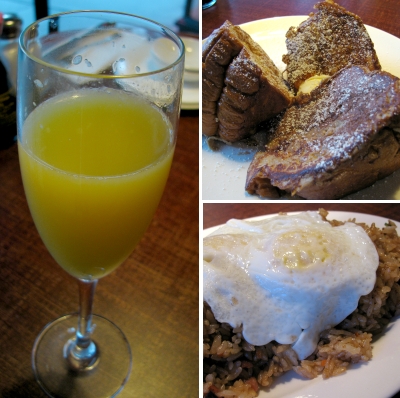 We started off with breakfast, Chao Bistro offers three breakfast cocktails and the one we tried was their mimosa.  I made sure to only drink half of mine to pace myself, because it was so good I could have easily downed it in one gulp!  We were all impressed with out first dish, the Hawaiian French Toast.  The chef used a Hawaiian sweet bread loaf and cut it into wedges.  The bread is dipped in an egg batter and special 5 spice and cinnamon blend, then griddle fried and topped with powdered sugar and whipped butter with maple syrup on the side.  One of the most popular dishes of the night was the Island Style Fried Rice.  The fried rice had SPAM, BBQ pork, and Portuguese sausage!  You can choose what style you want your egg on top, I thought it was great fried. 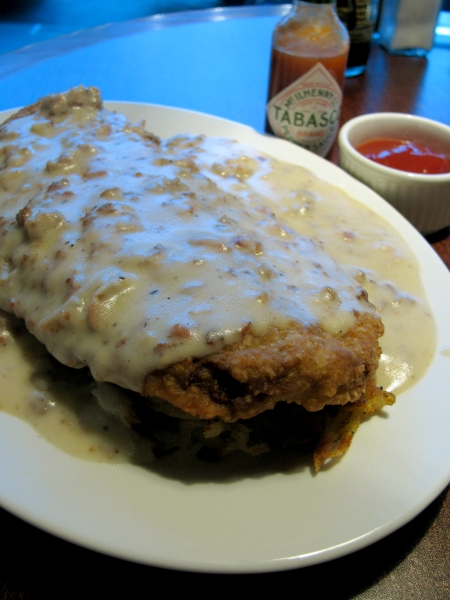 One of the biggest surprises was the Chicken Fried Steak.   Joseph and Daryn, our two male Tastecasters, were so excited to see the 11oz slab of tender beef steak layered with bacon and sausage country gravy over hash browns coming toward us.  I think most of the women were a little skeptical.  I think of  chicken fried steak as a “Dad meal”, it’s what my dad would get excited for when we’d go to breakfast, but not something I’d order myself.  Michelle and Theresa agreed that they might not think to order it either, but all of us were stunned by how great it was!  Paula told us that only one man has actually finished the whole dish himself.  I can believe it, it was huge.  At only $10 it would be a great brunch item to split with my husband!  I would definitely order their chicken fried steak in the future. 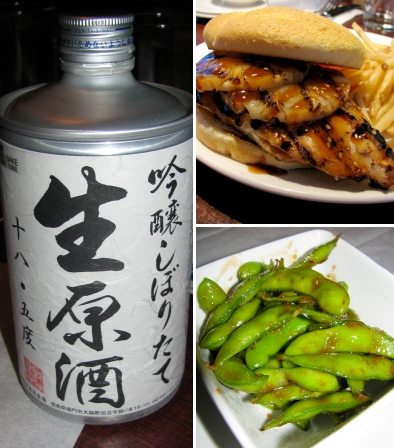 Next it was time for lunch, which meant it was also time for sake.  We tried a couple sakes with lunch and a couple with dinner.  My favorites were the flavored sake, which I wouldn’t normally order but the Hana lychee sake by Takara Sake knocked my socks off!  The edamame (pronounced Ed-ah-mom-ay, or soybeans) was another favorite of the whole team.  When I first tasted them I exclaimed “these are better than MY edamame!”  They’re a specialty of the chef, Kevin Aylesworth, who sears them in a wok after boiling.  The sauce is a mix of soy, ginger, garlic, sesame oil, serrano peppers and oyster sauce (I think that’s the secret ingredient!) then they’re sprinkled with sugar.  The Hawaiian Chicken Burger was a grilled chicken breast glazed in their house teriyaki and topped with grilled pineapple on a sesame seed bun. 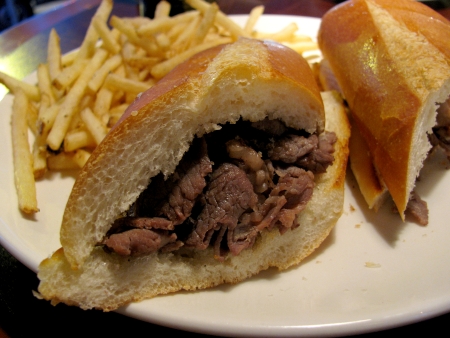 The 12th Ave French Dip sandwich had delicious thinly sliced prime rib on one of my favorite kinds of bread, a Vietnamese French roll!  The au jus was rich and full of flavor without being too salty.  That’s something we noticed about all of their dishes, everything was well flavored without being super salty! 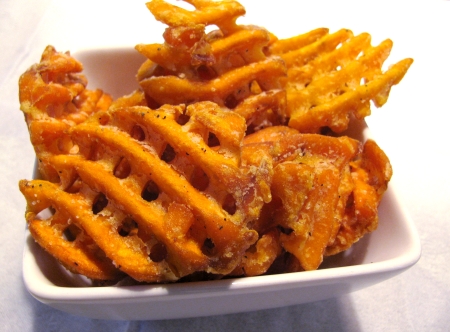 One of Chao Bistro’s most popular sides is their waffle cut sweet potato fries.  I loved the texture because I find the bigger sweet potato fries get a little soggy, but the waffle shape lends itself to a crispy bite with a soft center.  So great, you don’t even need ketchup! 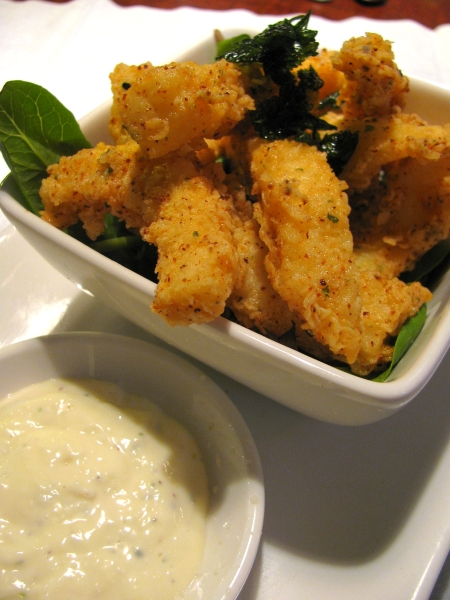 We all LOVED the calamari, Chef Kevin cuts the calamari steaks himself and tosses them in a breading that includes togarashi flour, chili powder and orange peel.  They’re served with a ginger citrus aioli and pretty much the best calamari I’ve had in Seattle.  You can get them for free until Nov 30th with dinner!  Just ask for the Tastecasting calamari special. 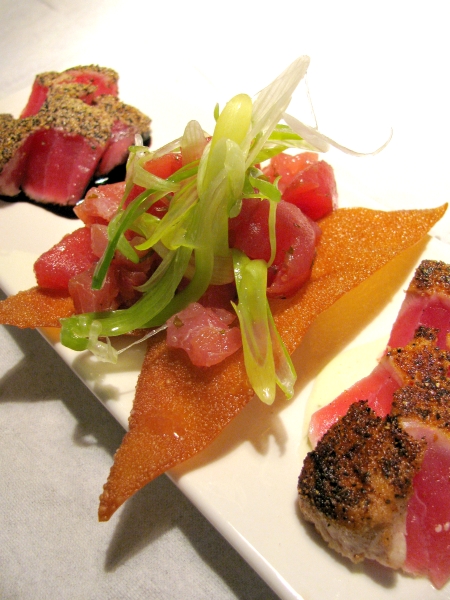 The Ahi Trio had a nice progression of heavier to lighter flavors.  On the far left is a peppered seared ahi over a balsamic reduction, in the center is an ahi tartar on crisp wonton chips topped with green onions, and on the right is a seared ahi over a cucumber coulis. 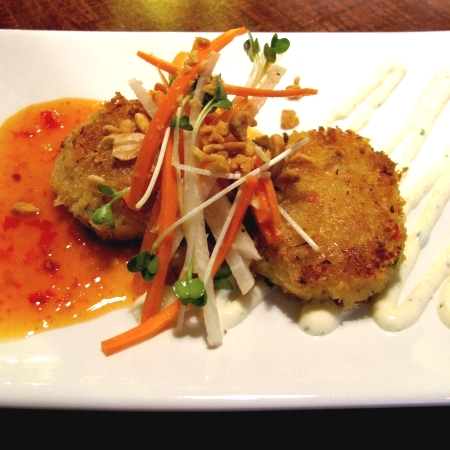 The Lemon Grass Crab Cakes had a surprising amount of crab meat in them.  They’re panko dusted dungeness crab with lemon grass, coconut, red bell peppers and shallots.  The finished cakes are topped with jicama and carrots in a lychee vinaigrette and served with a citrus ginger aioli and a sweet chili mango sauce.  The Inchinokura sake went great with the sweet chili mango sauce! 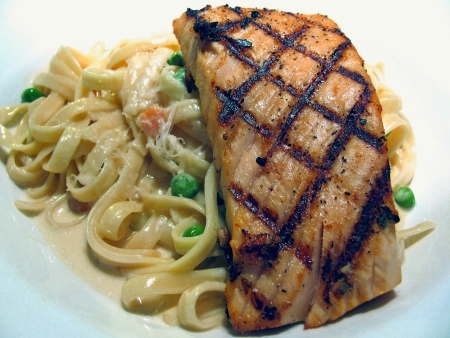 The Miso Cream Fettucini is an al dente fettuccini tossed with a miso cream sauce, peas and carrots, then topped with asiago cheese.  We got to try it with both salmon and grilled chicken, both were great and I was really impressed with the texture of the salmon. 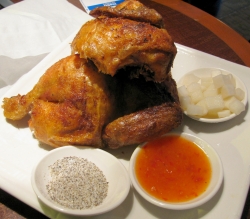 One of the most unusual dishes was a Whole Fried Chicken!  Tony, one of the owners, told us that in Korea when people go out drinking they want to eat with their drinks.  He said a very common dish to order is a whole fried chicken.  They decided to include it on their menu with salt and pepper and sweet chili sauce to dip it in, plus a tasty daikon radish pickle. 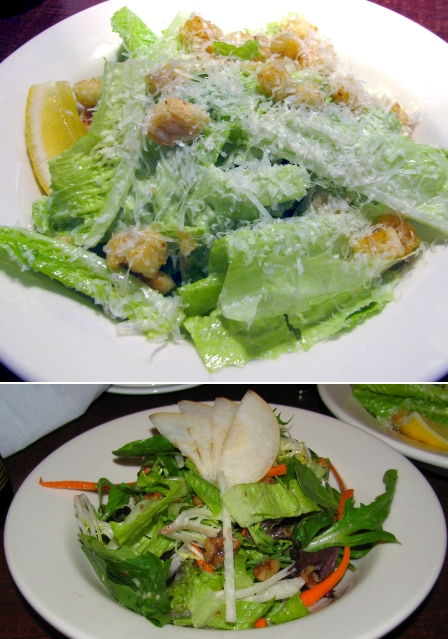 We had two salads to try, and the first was a unique twist on your basic Caesar salad.    A Wasabi Caesar Salad!  They mix wasabi into the dressing and bake their own buttered croutons.  The second salad was the Chao Signature Salad, spring greens tossed in a lychee vinaigrette, topped with 5 spice candied walnuts and Asian pear.  You know I love Asian pear in salad! 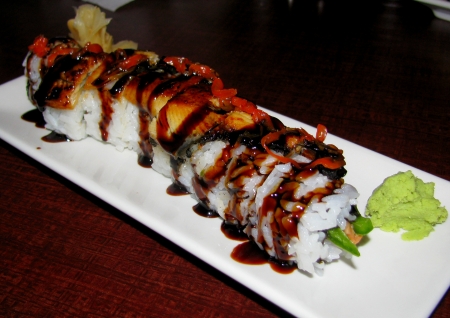 Chao Bistro also offers several sushi rolls.  The first one we tried was the Flaming Dave with spicy tuna and jalapeno inside the roll and topped with eel and habanero.  It had a MAJOR KICK!  Our end of the table said it’d be a great dish to pair with sake or beer to cut the spice. 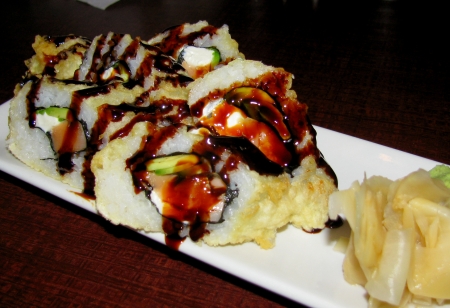 The second roll was the Seattle Tempura made with salmon, cream cheese, avocado and deep fried in tempura batter.  I believe both were drizzled in a kabayaki sauce. 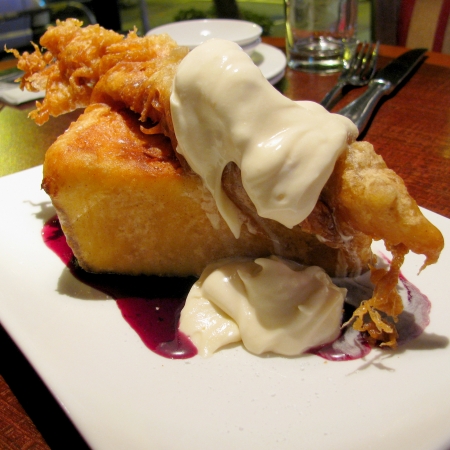 For dessert, we had deep fried cheesecake, that’s right… DEEP FRIED CHEESECAKE!!!  The cheesecake slice was battered in a brown sugar tempura batter and served with a blueberry compote with Baileys whipped cream.  Oh man, such a decadent dessert. 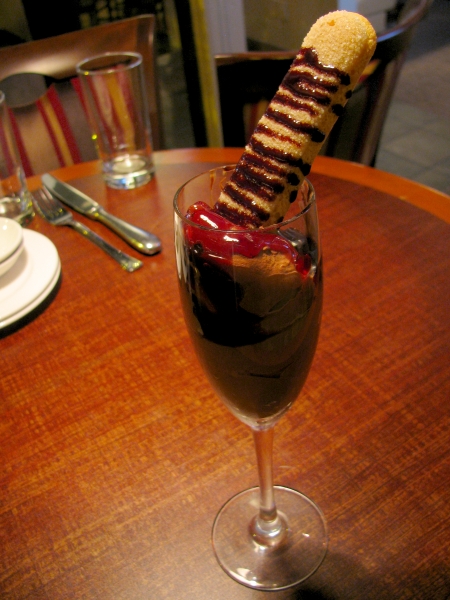 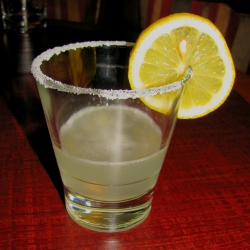 Finally Paula and Tony surprised us with a lemon drop, one of their signature cocktails.  I only had a sip, but it was one of the best I’ve had.  Paula said they have several great cocktails in addition to the sake, wine and beer. 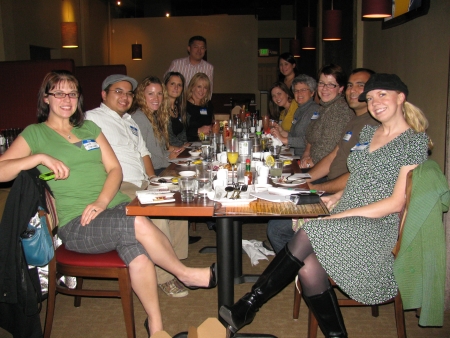 It was a fantastic night and I will definitely be back to Chao Bistro, as well as recommending it to friends.  I was so impressed with the affordability of the dishes with such large portion sizes that I could easily share a meal with someone.  This is a great place for high quality food at wallet friendly prices.  It’s also a perfect place for foodies whose friends or family could care less about things like a restaurant making their own croutons.  There are a lot of dishes here to make everyone happy.

Now two important specials for you:

-A free calamari appetizer with dinner (5pm-11pm) and a minimum $15 purchase.  It’s only good to Nov 30th so hurry over there and tell them you read about them on Tastecasting!

-You can also get a 20% off coupon on their facebook page good until the New Year.