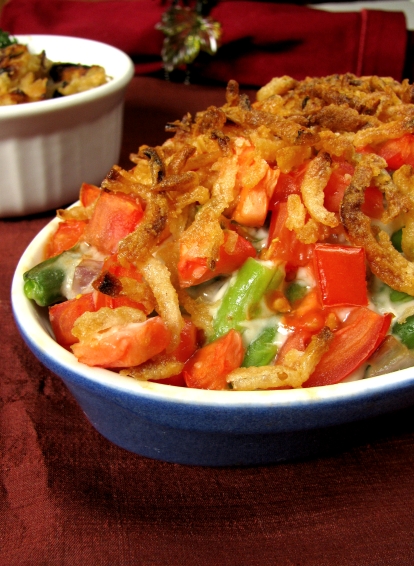 Starting 7 years ago I searched high and low for the best green bean casserole recipe.  I found ones that were too rich, too goopy, not flavorful, or boring.  Ones that did sound good involved tons of ingredients and more preparation than I felt I could spend , especially if trying to prepare a giant holiday feast.  Basically, I was constantly being disappointed.  So I decided to come up with my own perfect recipe for green bean casserole. 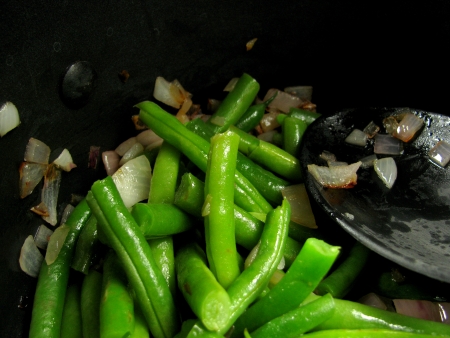 Inspiration struck when Eric and I were house/dog/camp sitting for some very dear friends of ours who run a Christian camp.  I was in charge of the green bean casserole for the Christmas Eve dinner for Eric’s HUGE extended family gathering.  (Oh, and by huge I mean the number of people who attend, just to clarify!)  I had a big bag of fresh green beans, I trimmed them, halved them, and washed them.  Then I just stood there staring at them.  I walked to the fridge, a mix of food we brought and our friends’ food (which they encouraged us multiple times to eat as much as wanted of).  I pulled out some butter and some shallots.

Then I walked to the pantry and grabbed a can of cream of mushroom soup and french fried onions (I don’t think it’s green bean casserole without them!).  I chopped up the shallots and sauteed them in the butter.  I blanched the green beans and then added them.  Next came the soup mix.  But it felt like something was missing.  I walked back to the fridge, and saw them……BRIGHT….BEAUTIFUL….RED….TOMATOES!!!! 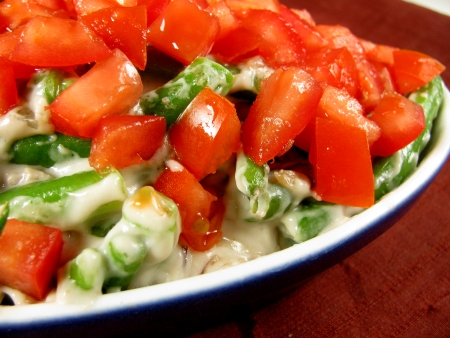 Excitedly I chopped the tomatoes and tossed them over the bean mixture.  Next came the french fried onions and into the oven it went!  I LOVED the tomatoes on the casserole, they gave it a brightness of flavor that I felt was missing in everything I tried before.  I’ve played around with the recipe a little over the past couple years.  The one below is the size I make when it’s just for Eric and I, which feeds about 5 as a side dish or 2-3 as a vegetarian main dish.  You can easily multiply it to feed more. 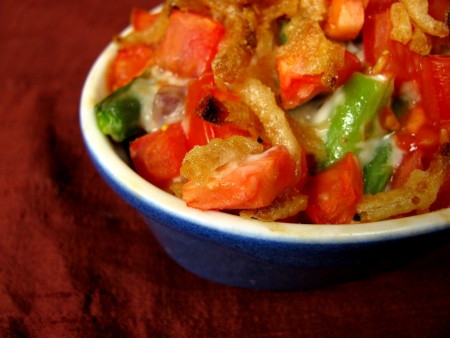 Preheat oven to 350 degrees.  Break the stem end off the beans and then break beans into thirds.  Bring a large pot of water to a boil.  Add beans and let cook for 3 minutes.  Drain and rinse in cold water to stop the cooking.

Melt butter in the pot and add the shallot.  Sautee on med-high until shallots are transparent.  Add the green beans and mix well.  Sautee another 3 minutes then mix in the cream of mushroom soup.

Spread the bean mixture into a casserole dish and sprinkle tomatoes over the top.  Sprinkle with the French fried onions.

Bake in the oven for 15-20 minutes until french fried onions are golden brown and green beans have softened.

Approximate cost/serving: Here’s another really affordable side.  We get our beans from the CSA and freeze them to last through the winter.  But even if you buy them in the store it’s only around $1 in beans.  With the other ingredients it’s $2.20 cents to make.  At 5 servings it’s 44 cents a serving.

Vegetarian/Gluten Free: It’s vegetarian, but for gluten free you need to make sure to use gluten free cream of mushroom soup like this one, and either skip the french fried onions or make your own like the gluten free mommy.