If you need a gingerbread or frosting recipe, check out my post on our winning gingerbread chapel last year. 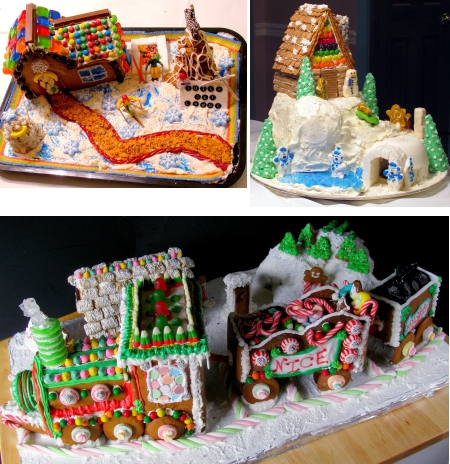 We have an annual tradition with Eric’s family, a gingerbread contest, and we’re hard core!  You voted for your favorites, and the winner is….drum roll please! 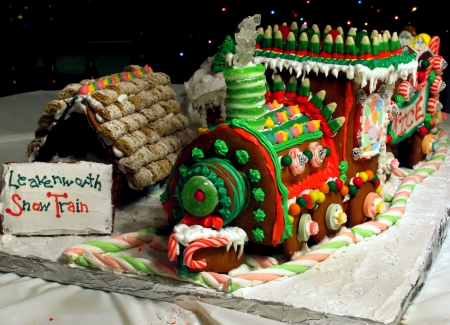 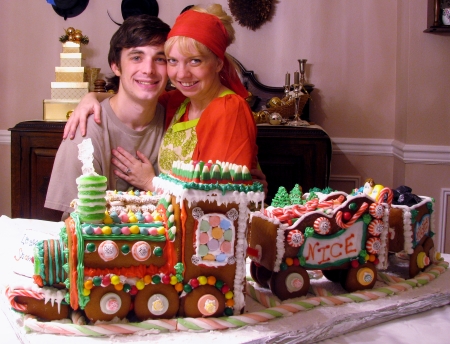 Eric and I made the Gingerbread Snow Train.  Doing a train was Eric’s idea.  We do a fun experience together as our Christmas gift for each other, and last year we took the Snow Train to Leavenworth.  It was a great trip so we had a lot of fun talking about it as we decorated our train. 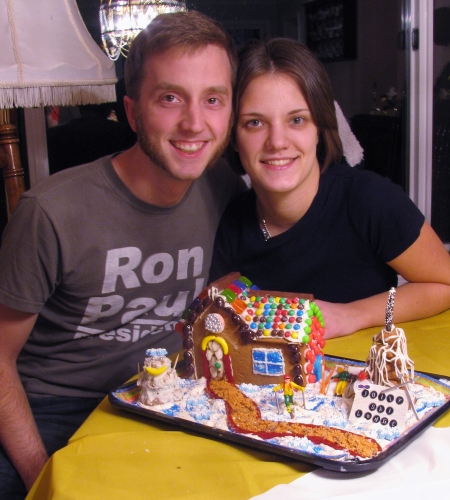 John and Heather made the Jolly Ski Lodge, named after John whose last name is Jolly.  Oh, and by the way, that will be Heather’s last name soon too!  During last year’s competition I introduced John as Heather’s boyfriend, but this year he’s her fiance!!!  Make sure to congratulate them, we love John and are so excited. 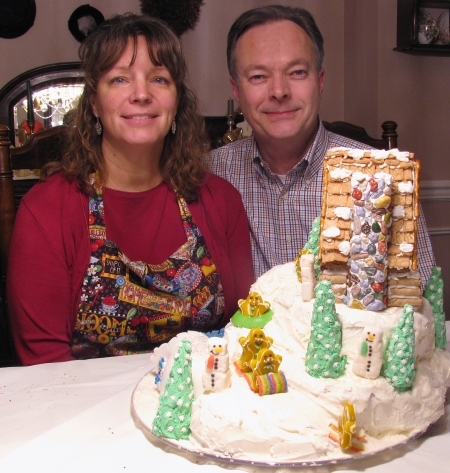 Jeff and Patti made the Polar Bear Party with the Gingerbread Playland up above.  They were pretty sneaky, Eric’s mom had been doing a lot of trash talking, but when we showed up they just had the little cottage to decorate.  We knew something had to be up, but we didn’t say anything. 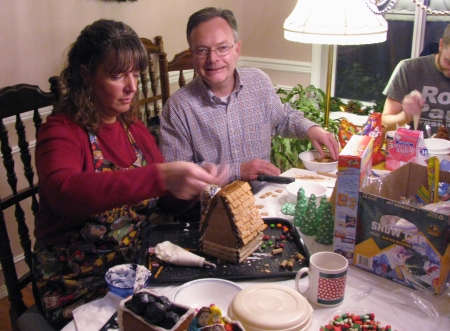 Once they finished decorating their cottage, out came the snowy hill filled with gingerbread men and polar bears.  Sneaky!!!  Now we understand what all the trash talking was for.  Their whole creation was ADORABLE!  We thought for sure they’d take the votes this year. 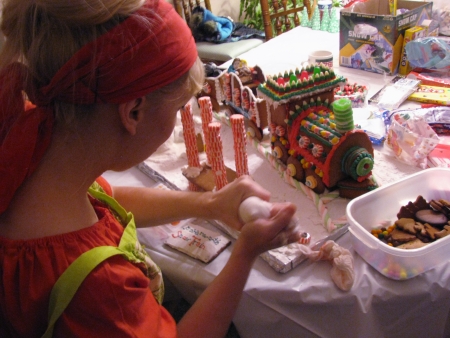 I’m not gonna do a step by step tutorial for the train.  I didn’t save my template because I just kind of design it myself and cut it out of cardboard to make the pieces.  I will give you a couple tips on how to make a gingerbread train though.  The most difficult part was the rounded body of the engine.  I tried bending a rectangle while it was still hot, which resulted in an “Oh Crap!” moment as it broke in half. 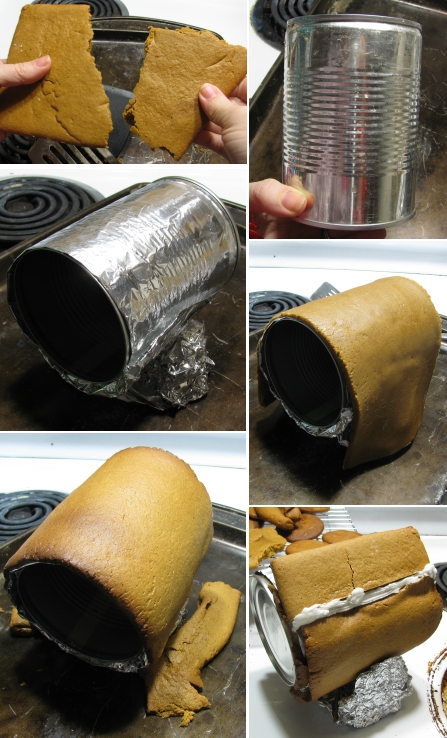 So I took an empty coconut milk can that was the size I wanted, wrapped it in foil in case the gingerbread stuck, and made a foil base to hold it at the height I wanted for the sides to drape down.  I pulled it out of the oven and had another “Oh crap!” moment as I saw the sides had fallen off.  Eric loves those moments because they mean gingerbread snacks for him!  But I ended up using the ends of my first broken piece, and using frosting to glue them onto the rounded part.  If you’ve got broken pieces you’re gluing on with frosting, it helps to have another piece (or a graham cracker) on the back side glued to both pieces for extra support. 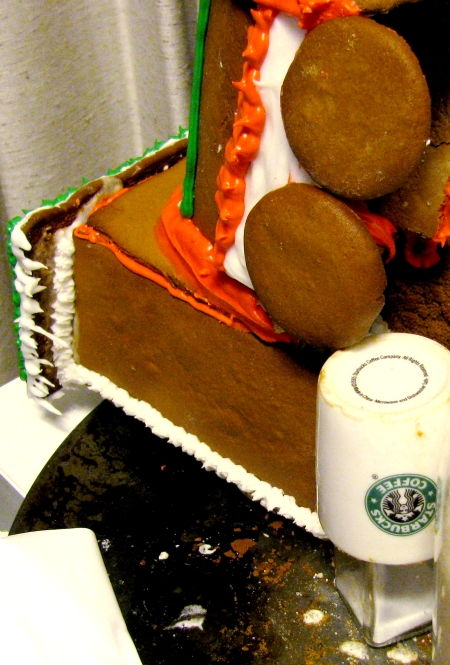 Getting the wheels to dry well enough to support the train took a bit of McGyvering, but I found enough items in my kitchen to hold each wheel up as it dries.  I got the best support by having an inner and outer wheel in each wheel location. 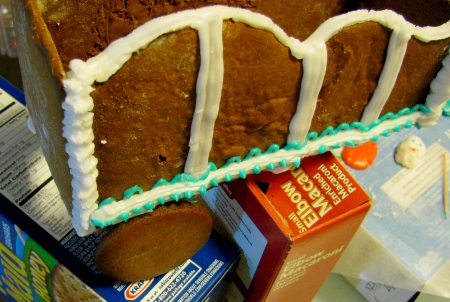 For the carts I had different sized boxes to hold the wheels on while they dried.  One was actually supporting the weight of the cart, the other boxes were just the right height for the wheel to balance on.  Notice on the right side?  That little bald head?  I made our frosting selves by piping us onto waxed paper, letting it dry, flipping it over and piping the other side to fatten it out. 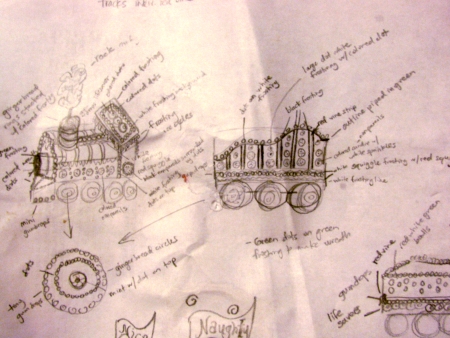 Although the train didn’t turn out exactly as we planned, it still was pretty similar to my blueprints.  Drawing it out helped a ton!  So now that we’re the grand champions two years running, we have no idea how we’re going to outdo ourselves next year!  This year’s theme was “Let it Snow”, any suggestions for next year?