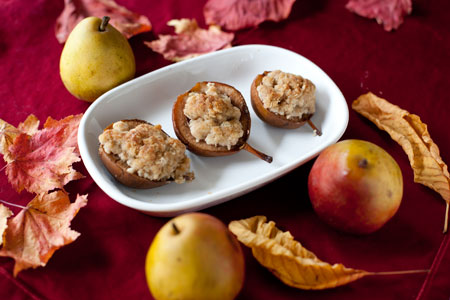 Eric and I bought a box of twenty “sugar pears” from Sam’s Club at the beginning of the month. They started out firm and crispy, perfect for salads and sandwiches. As they got slightly softer they began to truly live up to their name with a juice rolling down your chin sweetness. As I wiped my chin with a juice soaked napkin from the first ultra ripe pear, I knew it was time to turn them into a healthy dessert.  This simple dessert is now at the top of my dessert list in my collection of Thanksgiving recipes.

For some reason it was only a few years ago that I realized there were so many different kinds of pears.  I knew there were yellow ones, red ones and green ones, a brown one with a long neck, as well as my favorite Asian pear (pear/apple as we called them in Korea), but that was the limit of my pear knowledge. 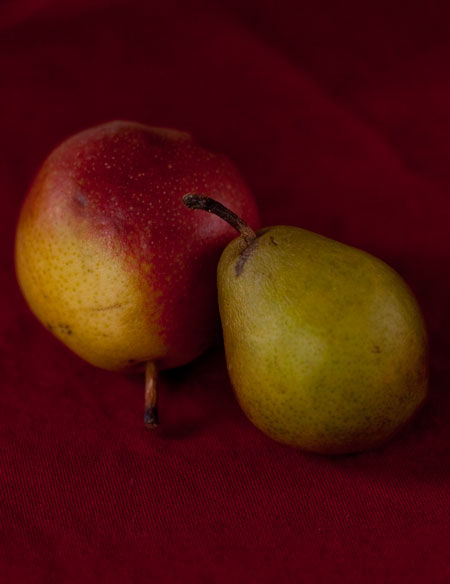 I now know that there are over 3,000 varities of pears out there but only a handful of them are commonly known in the US.  The typical green one I grew up eating is the Green Anjou and is one of the most recognizable pears in grocery stores.  It’s also more likely to available year round.  This pear’s fraternal twin is the Red Anjou which has the same egg like shape but is a deep maroon color.  The Red Anjou is becoming more and more popular for growing in the Pacific Northwest.  The two pears taste the same, with color being their only real difference.

The golden yellow pear I love so much is called a Bartlett and, like the Anjou, also comes in a red variety.  The Yellow Bartlett is probably the most recognizable pear in the US, it’s the sturdy reliable Old Yeller of the pear family.  One interesting fact I’ve learned in my pear research is that if allowed to ripen on the tree the pears develop that gritty texture that I think of as mealy.  Because of this the pears are picked mature but not ripe, they’re then allowed to ripen at room temperature which leads to a smoother texture.  I’m usually not a fan of produce picked before it’s ripe, but I think I’ll make an exception here!

The Bosc Pear is the punk rock chick of pears.  Its delicate sillhouette and slender neck seem in contradiction to its tough skin covered in brown rough patches.  But just like those punk rock chicks (a category I used to fit into quite nicely), underneath that “Touch Me and I’ll Scratch Your Eyes Out” tank top is a heart of gold.  Bosc pears are still tougher than other varieties, which means they stand up well to baking, poaching and more. 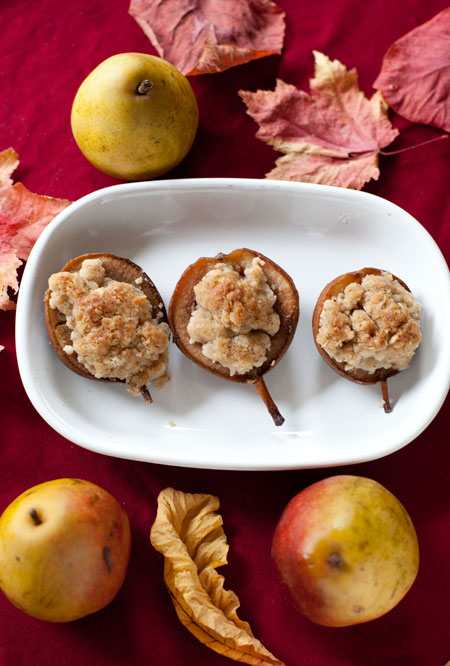 The pears we bought are commonly called sugar pears, but their real name is Seckel Pears.  These are the smallest variety of pears and the only ones believed to actually be originally from America.  They are commonly believed to have been discovered near Philadelphia, though there is a chance that some seeds were inadvertantly dropped by German travelers.

There are a few more varities out there you may see in grocery stores, but let’s talk about what to do with pears while in the glorious peak of their season!  Pears are phenomenal in salads, I especially like them paired with hazelnuts or pecans and some goat cheese or feta in fresh spinach or other hearty greens.  They also make a fantastic fruit pairing for your holiday cheese platter (I had some awesome Christmas pears with my cheese platter for my local seasonal Christmas party last year).

As far as dessert goes, we love poached pears, pear cobbler, even just canned pears topped with a little homemade granola and a dollop of cream.  But this little dessert of tiny pears stuffed with a crumble topping is our new favorite.  I personally ate 6 of them in a matter of minutes. 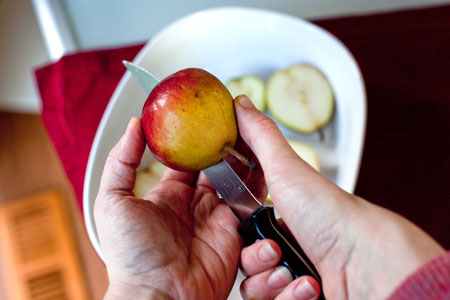 Preparation for this elegant holiday dessert is simple.  Just slice each pear in half (I like to slice a little off center to leave the stem intact on one half).  Once they’re sliced use a spoon to carefully scoop out the seeds and core.  If you have a husband who’s anxiously awaiting dessert, have him slice whil you core and get it done even faster!

Next mix together your topping ingredients.  Notice I went very light on the sugar because the pears themselves are so sweet (yay for the healthy bonus!).  Make little balls of the crumble dough and gently press them into the newly made hollow in each pear half.  You don’t want to bake the pears for two long and have them shrivel up, so after 15-20 minutes I turn the broiler on to toast the crumble topping. 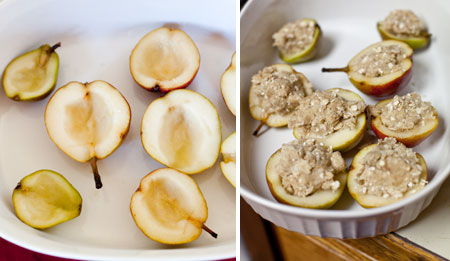 You can serve the pears exactly as they are, eating them hot from the pan in greedy gulps, or you can make them quite elegant on dessert plates sprinkled with cinnamon sugar.  They also make dainty garnishes for a holiday meal or a party buffet.  If you don’t mind upping the sugar and fat factor, a scoop of vanilla ice cream is the perfect accompaniment, but not required.

Do you have a favorite type of pear?  How do you like to eat it? 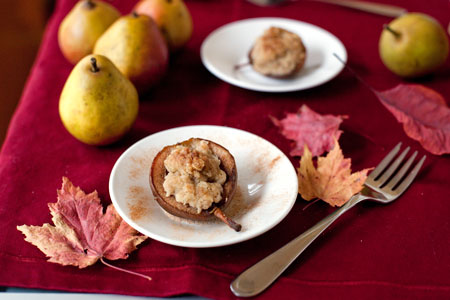 Preheat oven to 350 degrees.  Slice pears in half lengthwise and use a spoon to remove core and seeds. Mix remaining ingredients until they form a doughy ball.  Divide into eight smaller balls and place one into the hollow of each pear.

Approximate cost/serving: We got a box of 20 pears for $4 so just 20 cents a pear.  If you’re serving this as a light and elegant dessert as pictured above, it’s only 25 cents a serving!!!