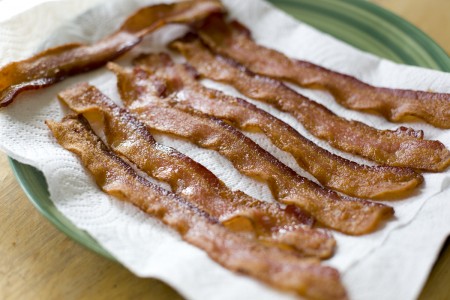 Okay, so I’ve showed you how to make your own bacon from scratch, but what’s the best way to cook your bacon once you’ve made it?  I’ve cooked bacon in the microwave and in a skillet, but my absolute favorite way to cook bacon is in the oven.

I’ve yet to meet someone who doesn’t like bacon (If you are one of those rare people, don’t worry, we can still be friends).  Even my vegetarian friends list bacon as the one food that sometimes tempts them to the world of carnivorous pleasures.  I like to call bacon “meat candy”.  Really, think about it… candy, bacon… bacon, candy.  They can have similar addictive properties.

At a recent cooking class I made bacon brussels sprouts.  There was a man in class who “hated” brussels sprouts with a vengeance.  I could see feel the tension emanating from his bandanna clad forehead, fear clouding his face as his wife said, “You have to at least try one bite!”

All 30 of us eagerly watched the poor man as he took his first bite.  His face transformed from a look of anxiety, to surprise, to curiousity, and finally satisfaction as he took bite after bite of the dreaded brussels sprouts.  “Bacon makes everything better.” I said with a smile as we moved on to the next recipe. 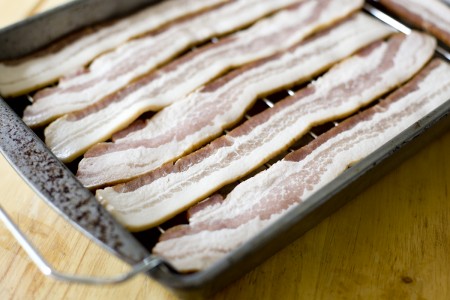 I’ve had chocolate dipped bacon, bacon muffins, even a bacon martini!  While some things (like the bacon martini) I might not try again, I’ve rarely tried something with bacon that I didn’t find delicious.  I love bacon with green beans and tomatoes, bacon with prunes, bacon pasta, bacon in casseroles, I even put bacon on my egg salad sandwiches.

In case you have yet to figure it out, I’m rather obsessed with bacon.  In oven cooking bacon, you can cook several pieces at a time without having to stand over a stove.  Even better, you can lower the fat content slightly by using a cooling rack.  The fat drips off the bacon and it is crisped up without soaking in the grease.  Don’t get me wrong, I love bacon grease, I save it up to cook potatoes in sometimes!  But if you’re trying to cut back on fat, this is great way to still get some bacon in your life.

I often cook six to eight pieces of bacon each week and put them in the fridge to crumble on salads and pasta or put into sandwiches.  I feel like I also have to admit that a couple weeks ago I was sick with a cold and feeling sorry for myself so had bacon for lunch, just bacon.

On Wednesday we’ll use some of this lovely bacon in a breakfast salad.  What’s your favorite way to use pre-cooked bacon? 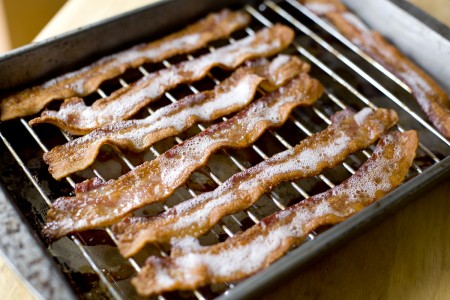 Approximate cost/serving:  My homemade bacon is just 13 cents a slice.

Gluten free: No adjustments needed, I think my gluten free friends are all thrilled that bacon is naturally gluten free!

7 thoughts on “How to Cook Bacon in the Oven”